Challenge. Kees van Dongen was a Dutch-French painter who was one of the leading Fauves. Van Dongen’s early work was influenced by the Hague School and symbolism and it evolved gradually into a rough pointillist style. In the last few decades two almost identical versions of a painting entitled ‘Nu en Buste’ attributed to him were brought to auction.

In May 2020, Version B was offered at auction in Paris with a WPI certificate attached. WPI showed a willingness to reconsider their decision about Version A, and asked for provenance records in order to reevaluate it. Unfortunately, the client could not provide any information on provenance, apart from the purchase at auction in 2008 and an appearance in a catalogue from 1989. The auction house which sold the painting in 2008 also did not provide any details on the provenance.

In this situation, the client turned to Art Recognition for getting clarity in this intricate story. 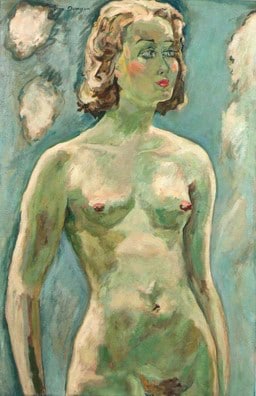 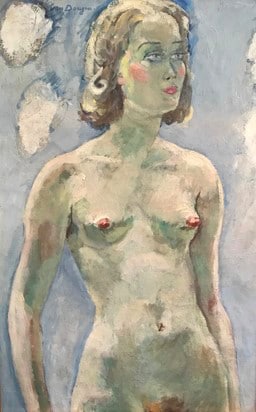 The Art Recognition AI System at Work. Having received high-resolution images of the two paintings from the client, we started by training our AI to learn the artist’s main features from a set of images of original paintings by van Dongen. To build the dataset, we used the paintings attributed to van Dongen as shown in the exhibition catalogues from “Musée National d’Art Moderne, Paris (1967) and Museum Boymans-van Beuningen, Rotterdam (1968)” and “Fondation Pierre Gianadda, Martigny (2002)”. To improve the algorithm’s discrimination capabilities, we have included in the training set paintings by artists of similar style and chronology such as Otto Müller or Albert Marquet.

We have also carried out a series of detailed analyses by splitting the images into smaller patches and analysing each patch separately. For example, on Version A the patches which came out as least authentic were the breasts (91% and 87% not authentic), the hair (75% not authentic) and the upper part of the face (85% not authentic).

The story ends with Version B being sold at auction. Version A remains a beautiful imitation …

For more information just write us a message on contact@art-recognition.com and we will be in touch shortly.